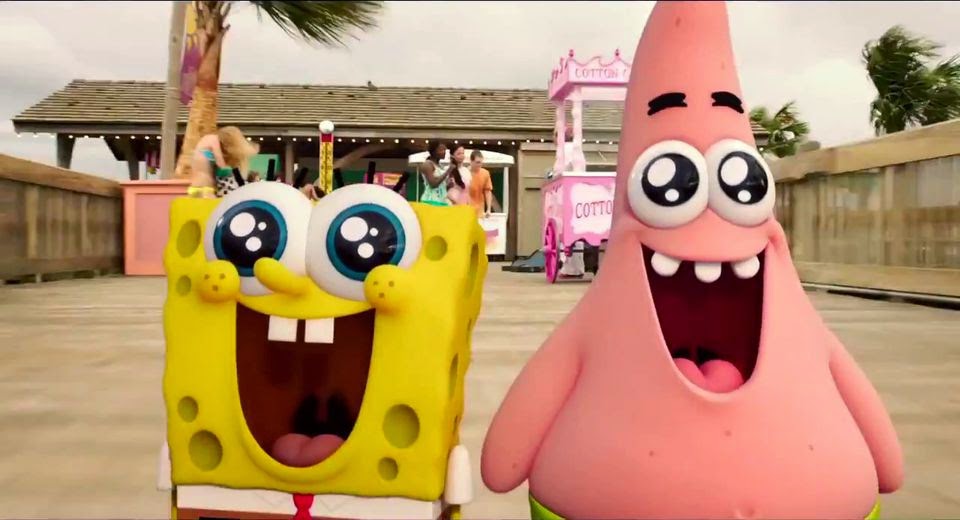 Well, this is a much better idea than theatres where text messages are projected on-screen. Cineplex Entertainment, which operates 160 theatres across Canada, has partnered with Autism Speaks Canada for a special screening series for moviegoers with autism spectrum disorders. Via the CBC, these Sensory Friendly Screenings take place at 12 theatres and will feature "2D projection, increased auditorium lighting, lower volume and smaller crowds." Moviegoers will also be able to bring in outside food, and a "calm zone" will be provided for those audience members who need to step away for a bit.

The series starts on 2/14 with The SpongeBob Movie: Sponge Out of Water (our review); future movies include Cinderella (4/4), DreamWorks' Home (4/18) and Avengers: Age of Ultron (5/16). Screenings will typically take place ever 4-6 weeks, all on Saturdays at 10:30am, before the theatres open to all patrons. The cost of all tickets will be the child price for those with autism and their families, and tickets will go on sale the Tuesday before each screening date. Check Cineplex's website to stay updated on future screenings and for a complete list of participating theatres.

Cineplex is only the latest theatre chain to take this leap forward in accessibility; AMC Theatres has been providing Sensory Friendly Films for years now, with special screenings spread across thirty states, plus Washington DC. In addition to high lights and low sound, "audience members are invited to get up and dance, walk, shout or sing!" Upcoming screenings include The SpongeBob Movie: Sponge Out of Water (2/14), Home (3/28), Tomorrowland (5/30), Minions (7/18) and Pixar's The Good Dinosaur (12/5).

(via FilmDrunk)
Posted by Rebecca Pahle at 8:53 AM 9 comments: 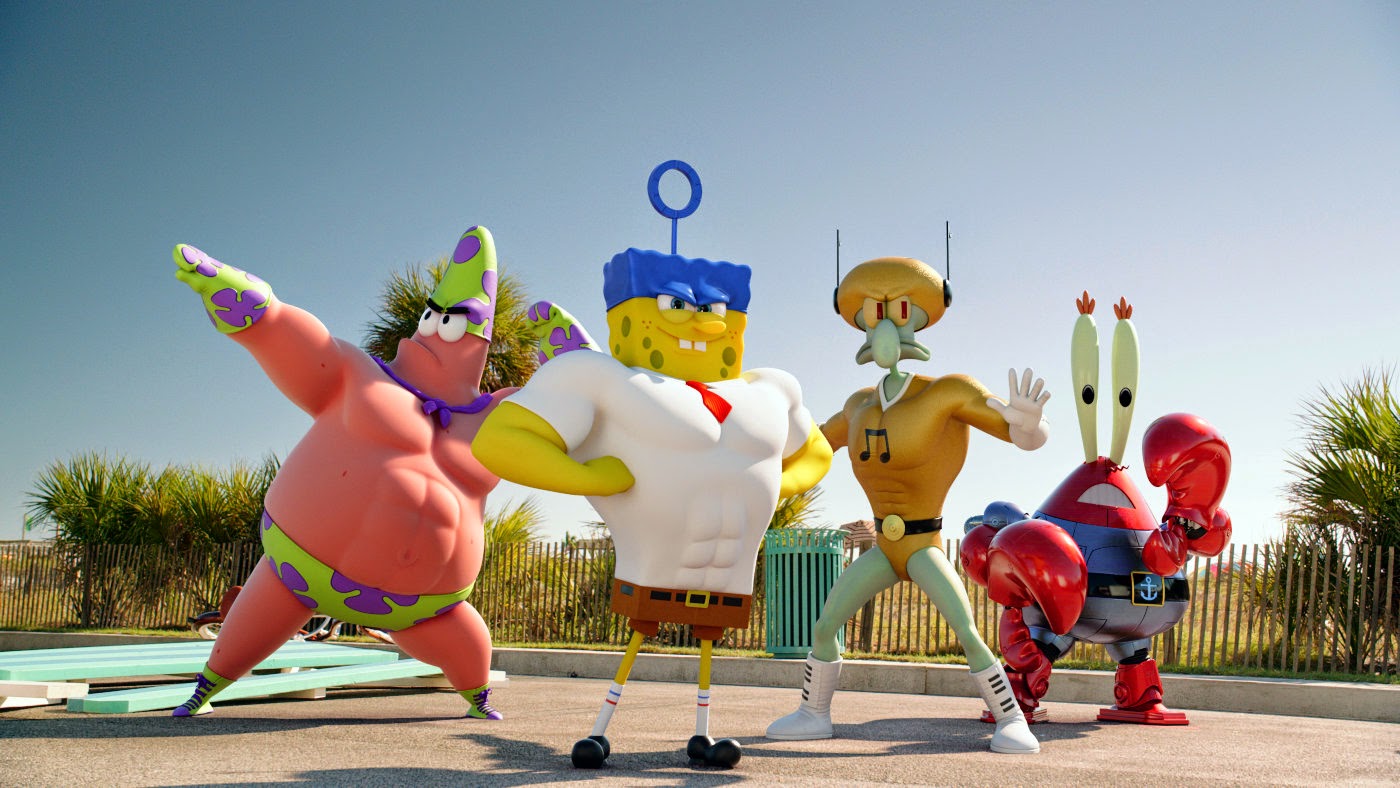 It was a foregone conclusion that The SpongeBob Movie: Sponge Out of Water would finally relieve American Sniper of the number one spot at the box office, but no one thought it would be by quite this much: The nostalgia-heavy animated film made $56 million on its opening weekend, for the fifth-highest February opening ever. Generally positive reviews helped, as did a savvy marketing campaign that emphasized how SpongeBob, Patrick and the rest would be going up to the "real world" in a CGI/live-action hybrid segment that actually didn't make up all that much of the running time.

American Sniper dropped one spot to number two, its $24.1 million weekend gross bringing its total so far to $282.6 million domestically. Box Office Mojo notes that that exceeds the combined grosses of the eight other Best Picture Oscar nominees. 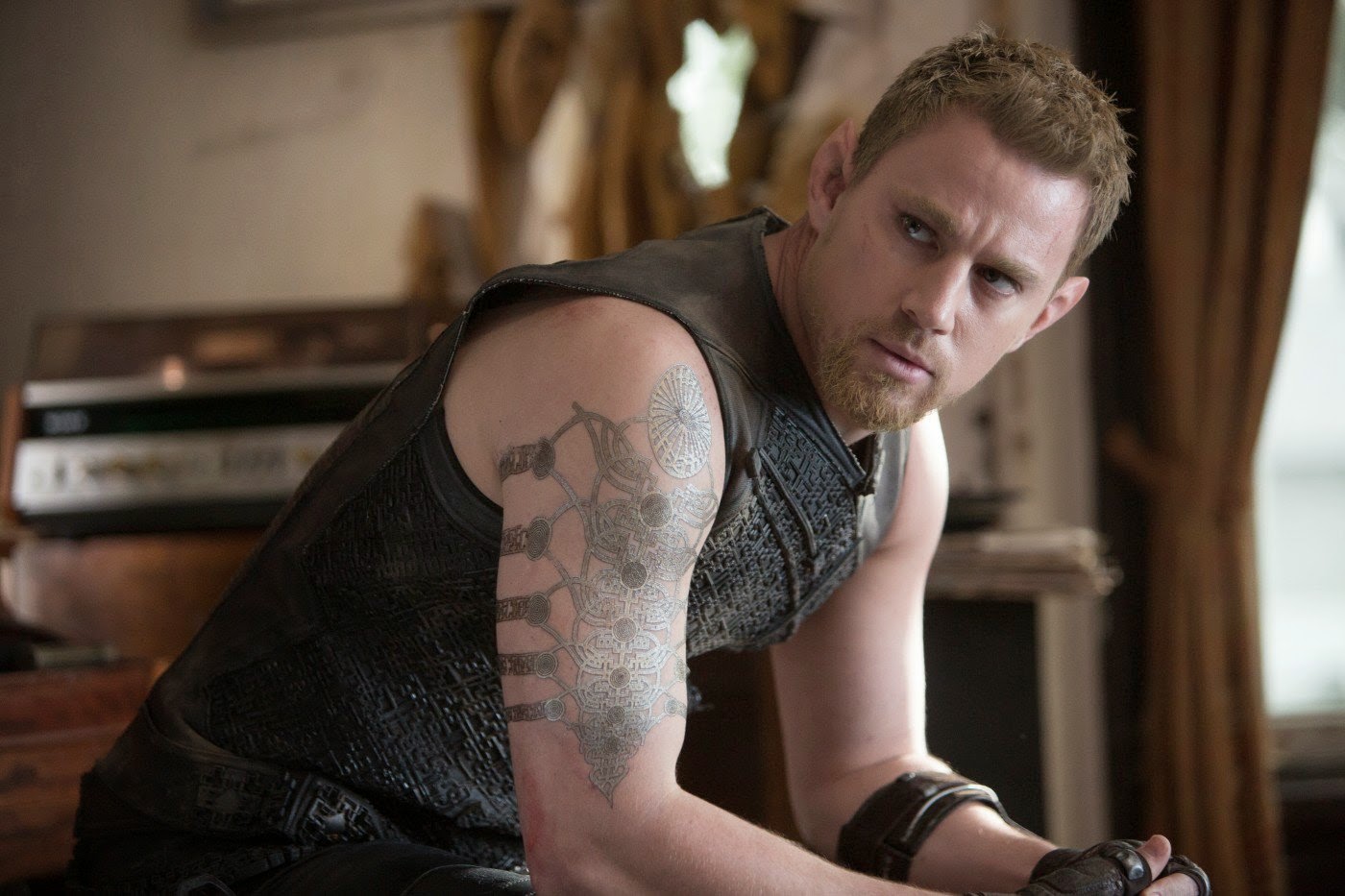 Coming in third was the Wachowskis' Jupiter Ascending, which earned a scant $19 million. That might not be so bad if the budget weren't a whopping $176 million, but alas. Andy and Lana should be getting some stink-eye from Warner Bros. execs today. Still, at least it's not Seventh Son, which couldn't even crack the $10 million barrier; Universal's wannabe fantasy epic made only $7.1 million on 2,875 screens. Rounding out the top five was Paddington, like SpongeBob a somewhat surprisingly well-reviewed kid's movie (though SpongeBob shouldn't hold out for that BAFTA nomination). Its $5.3 million weekend gross brings its total to $57.2 million.

Among new limited releases, writer/director/actor Rik Swartzwelder's Old Fashioned--an indie being marketed as a Christian alternative to next weekend's 50 Shades of Grey--earned a respectable $40,800 on three screens, proving once again the economic viability of faith-based cinema. The documentary Ballet 422 earned $26,000 on two screens, and the dismally reviewed Love, Rosie got $16,200 on 15 screens.
Posted by Rebecca Pahle at 7:11 AM 4 comments:

When Luke Skywalker tells you not to talk or text during a movie, you'd best listen. Or else, in the words of this anti-talking PSA, he'll "unleash an entire Secret Service made up of insane clowns, brandishing lightsabers, and he will have them completely destroy you." And this is the Alamo Drafthouse, famous for their complete and utter willingness to throw people out for cell phone use. I wouldn't bet on them playing around.
Posted by Rebecca Pahle at 11:53 AM 1 comment: 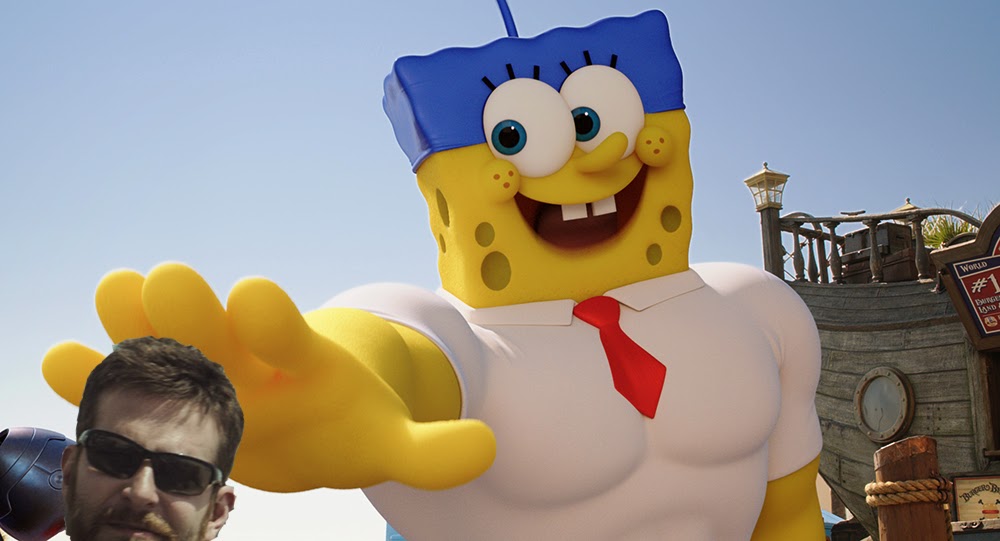 From his pineapple under the sea, SpongeBob SquarePants is poised to knock American Sniper out of the number one spot at the box office after a record-breaking run. Last weekend saw American Sniper's gross drop approximately 52% to $30 million. It'll keep dropping (everyone's seen it already--not like there's a lot of January competition), leaving room for The SpongeBob Movie: Sponge Out of Water, which should easily open north of $30 million anyway.

The real question is whether American Sniper will be able to grab the number two spot. Its only real competition is the Wachowski siblings' Jupiter Ascending, which co-stars The Theory of Everything's Eddie Redmayne in a scenery-chomping role he probably wishes people were seeing after the Oscars. The Wachowskis' cachet and Jupiter being an action-heavy sci-fi flick should help it, but the reviews (including ours) have been overwhelmingly negative. If word of mouth sets moviegoers off, Jupiter might be relegated to spot number three. It and Sniper are both expected to earn somewhere in the $20 million neighborhood.

Interestingly, Redmayne's fellow Oscar frontrunner Julianne Moore also has a stinker of a movie coming out this weekend: Seventh Son, which has been languishing on the shelf for years now and is finally being released by Universal Pictures, averting its gaze and whistling innocently like they don't know what this generic-looking fantasy movie is, golly gee! The reviews have been even worse than Jupiter Ascending's--an 8% approval rating on Rotten Tomatoes, compared to Jupiter's 24%. It probably won't crack $10 million. Moore and Redmayne should go to a bar together and get hammered.

Among the limited release movies hitting theatres this weekend in New York and/or LA are the documentaries Ballet 422 and 1971, Boy Meets Girl and "lost" indie melodrama Losing Ground.


Posted by Rebecca Pahle at 7:01 AM No comments:

Heritage Auctions Lets You Own a Piece of LAIKA Animation History

LAIKA, in the humble opinion of this FJI writer, is the best animation studio working today. Disney and, increasingly, Pixar can be inconsistent with the quality they deliver, DreamWorks films are generally solid but rarely blow-your-socks-off amazing and Sony Pictures Animation released The Smurfs. And sure, LAIKA hasn't had many opportunities to fall on their face when they've only put out three films. Stop-motion animation takes time. Still, the trio of Coraline, ParaNorman, and The Boxtrolls are a trio of modern masterpieces, combining striking visual style with humor, drama and important messages tackled in a more nuanced way than even many so-called "adult" films would dare.

Fellow LAIKA lovers will have a chance to get their grubby paws on puppets, original artwork, unused poster designs, props and more from the studios' trio of films when Heritage Auctions puts nearly three hundred lots up for bidding in Beverly Hills next Thursday, February 12th.

Heritage brought part of their "The Art of LAIKA" collection to their New York City office this week, and the FJI office was fortunate enough to take a field trip and check out the goods. There was the Other Mother puppet from Coraline, a stunning Angry Aggie concept art piece from ParaNorman and Archibald Snatcher's Boxtrolls extermination truck, among many other wonders. All puppets sold in the auction, explains Heritage's Director of Animation Art Jim Lentz, were used in production of the film. They're not cheap, so LAIKA doesn't make them just for show and tell. 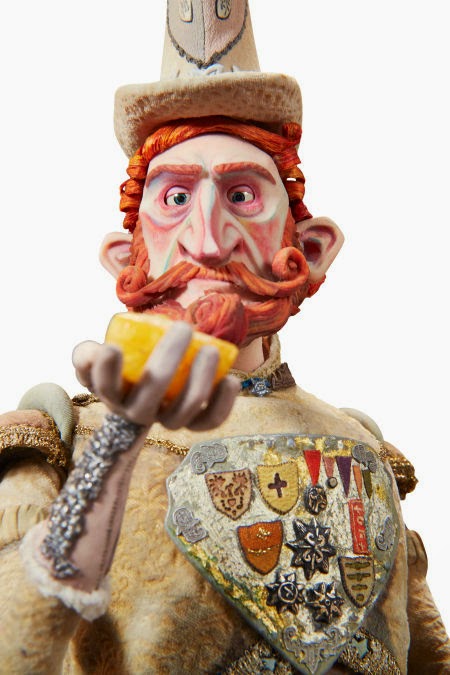 The limited nature of LAIKA's offerings means "There will be not be a second Coraline auction. There will not be a second ParaNorman auction," warns Lentz In fact, LAIKA wasn't sure they even had original art for Coraline kicking around until Lentz asked for it. They dug some up from a crate in LAIKA's descriptively named "Storage Facility by the Swamp," and yes, it is by a swamp.

"The Art of LAIKA" has led to an unprecedented level of interest from the public, both on social media and in-person; Lentz describes people coming up to him and thanking him for the chance to see part of LAIKA's archives when Heritage made a stop in Dallas. Indeed, some of the objects up for auction are breathtakingly detailed when viewed them up close, like the puppet of Lord Portley-Rind (left) from The Boxtrolls. With all the hand stitching, you'd think LAIKA was preparing for a high-class fashion show. Even things that are part of the background, like a manhole cover or cheese vendor's stand, are painstakingly given details that most moviegoers won't notice, like a town logo on the former and a board with cheese prices on the latter.

"The studio's legions of die-hard fans regularly ask LAIKA for the opportunity to own some of the masterfully engineered puppets, props and other artwork used to make these beloved films," says Lentz. "So the studio is finally offering a specially curated collection of items from its production archives. This is the chance that those fans, and animation and film collectors of all stripes, have been waiting for."

For those with money to spend, you can bid one of nine ways; early Internet bidding ends on February 11th, and the auction itself starts on February 12th. A portion of the proceeds will go to the Los Angeles-based charity organization The Art of Elysium, which has as its mission "enriching the lives of artists and critically ill children" by hosting arts-based programs for hospitalized youth. If you're in the Los Angeles area from February 10-12, stop by Heritage Auctions Beverly Hills to see selected items in-person.

For more information, visit the Heritage Auctions website. You can see details and pictures of all the lots here.
Posted by Rebecca Pahle at 8:21 AM No comments:

'American Sniper' Has a Super Super Bowl Weekend, New Releases Not So Much

Super Bowl weekend doesn't tend to be a particularly good one for movies, but American Sniper has shown yet again that it doesn't care much for existing records. Its $31.85 million weekend haul is the highest-grossing for a Super Bowl weekend ever, beating out the $31.1 million earned by 2008's Hannah Montana/Miley Cyrus: Best of Both Worlds Concert Tour--which, by the way, earned that amount on its opening weekend. For Sniper, this was its fourth in wide release. So far, it's earned $248.9 million, though the 51% drop from last week doesn't look good for its continued box office dominance.

This weekend, though, it had no trouble, as the three new wide releases all flopped. Found footage time travel flick Project Almanac made only $8.5 million in 2,893 theatres, enough to put it in spot number three behind Paddington (weekend gross: $8.5 million; total gross: $50.5 million). Kevin Costner and Octavia Spencer's Black or White landed at number four with a gross of $6.4 million in 1,823 theatres. And The Loft, this weekend's biggest disappointment, couldn't even crack the top five--its $2.8 million in 1,841 theatres barely let it squeak into number ten spot. The number five movie was Jennifer Lopez's erotic thriller The Boy Next Door (weekend gross: $6 million, total gross: $24.6 million), which dropped off nearly 60 percent from its debut last weekend.

After five weeks in limited release, J.C. Chandor's A Most Violent Year expanded to 818 theatres and saw its box office increase to $1.7 million, for a total so far of $3.1 million. New in limited release, Chinese action comedy Running Man and Best Foreign Language Film Oscar nominee Timbuktu earned $205,000 and $50,000, respectively. And the theatrical release of two episodes of "Game of Thrones" made $1.5 million on 205 IMAX screens, enough to land it at spot number 15. It's not a ton of money, but the amount that Warner Bros. and HBO needed to pay for marketing was low, so, as far as theatrical exhibition experiments go, it seems to have been a successful one.
Posted by Rebecca Pahle at 7:00 AM No comments: