The week following the July 4th holiday began with a bang that, though it did not emanate from the United States, has resounding implications for our little local film industry. Transformers: Age of Extinction is now the highest grossing movie of all time in China, the world’s second largest film market. As of Monday the film had displaced previous record-holder Avatar ($221.9 million) with its $227.9 gross. Paramount took great pains to appeal to the Asian audience, ensuring parts of the feature were shot in China and casting Chinese star Li Bingbing. As viewership within the global power continues to increase, expect other studios to follow Paramount’s lead and develop films that appeal to movie fans out East. It seems so far as VFX extravaganzas are concerned, we can rest assured, or otherwise, an Age of Extinction, this is not.

Not everyone on the far side of the world is as enthralled with Hollywood, however. North Korea, for example, is supremely miffed. Today we learned the country has filed an official complaint with the United Nations, calling the forthcoming James Franco/Seth Rogen comedy The Interview “an act of war.” The movie follows Franco and Rogen as they plot to assassinate North Korean leader and frequent target of Western mockery Kim Jong-un. According to Reuters, N. Korean UN Ambassador Ban Ki-moon wrote the following: "To allow the production and distribution of such a film on the assassination of an incumbent head of a sovereign state should be regarded as the most undisguised sponsoring of terrorism as well as an act of war.” He goes on to add/threaten, "The United States authorities should take immediate and appropriate actions to ban the production and distribution of the aforementioned film; otherwise, it will be fully responsible for encouraging and sponsoring terrorism.” Further proof comedy does not travel well.

AMC is looking to mimic a popular, and frequently contentious, characteristic of airline travel with its proposed revamp of several thousand locations. The theatre chain will install fully reclining seats in roughly one third of its 5,000 sites nationwide. It’s an initiative that will cost $600 million, take five years to complete, and initiate a whole new kind of communal experience. As frequent fliers are well aware, if the person in front of you reclines, you too must recline, that is, should you count yourself among those who find cramped spaces uncomfortable. Let’s hope AMC improves on this model.

Isn’t that a funny notion, improvement? The word has grown increasingly uncanny with each refashioning of a beloved cartoon into a live-action remake. Will the new live-action spin on Dumbo “improve” upon the original? Perhaps when elephants fly.

We would be much more excited to view an adaptation of the new short story about Harry Potter and the gang author J.K. Rowling posted to the fan site Pottermore earlier this week. We’re still waiting with bated breath for the release of the Rowling-penned and Potter-themed film Fantastic Beasts and Where to Find Them, but when we do inevitably exhale, we’ll be sure to courteously turn our faces away from the new behind-the-scenes book The Making of Stanley Kubrick’s 2001: A Space Odyssey. The geeky delight is separated into four volumes totaling 1,386 pages. It costs $750.

Here’s a piece of free geekery, should the aforementioned tome exceed your budgetary restraints. Ian McKellen as a 93-year-old Sherlock Holmes in Bill Condon’s Mr. Holmes: 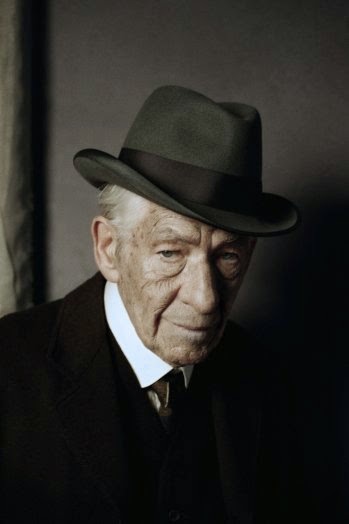